When I think of my Liv, I think without fail “my baby”, or “the baby”. She is, right? She still snuggles up with me on the couch in the morning, still has a bedtime routine and is still such a lovey dovey. She can’t be anything more than a baby right?

It takes me seeing pictures of her to knock me in to reality—Liv is a full blown kid. Not a baby or even a toddler, a kid. In 2 months, she will be 4 and has asked to get her ears pierced. A kid.

This. Right here. This is a kid. 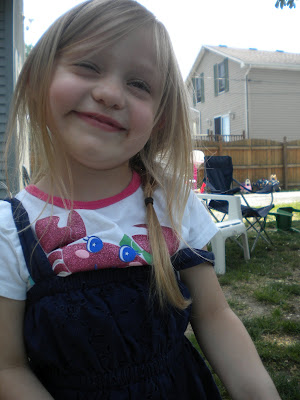 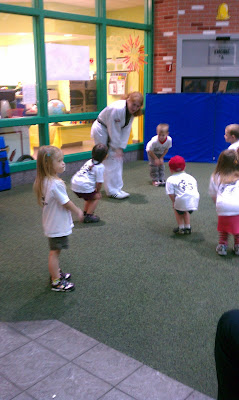 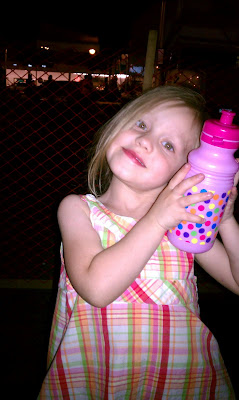 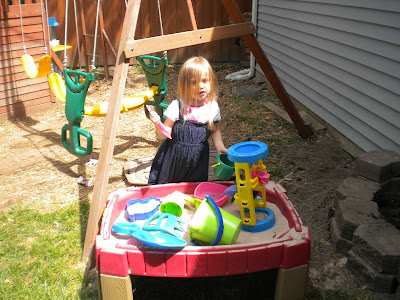 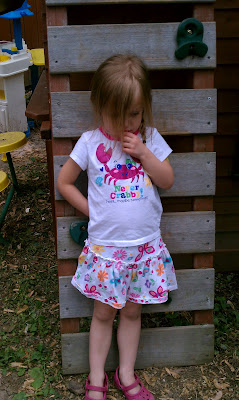 I vaguely remember Hub climbing over me to get out of bed early in the morning and Liv coming in some time later only to be shuffled out again. Then it was 10am and I was wide awake, not really remembering the last time I’d slept in, truly uninterrupted. I was greeted with a chorus on “Happy Mother’s Day!” and had bakery donuts and coffee waiting for me. Man, I love bakery donuts. Hub and I watched CBS Sunday morning and read the paper and later on he and the kids made me chocolate chip pancakes. Then, they left for the day leaving me on my own to do whatever I wanted.

For a while, I played Tetris on our old N-64 that we hooked up over the weekend. Then I took a long, hot bubble bath. I had a snack and read for a while. I rested a bit, but couldn’t sleep. And then because I wanted to, not because I had to, I finished up the informational pamphlet I was working on for our PTA. Bored, I called to see where Hub and the kids were. He used the gift certificate we got him for his birthday to buy a rocket, and they were heading to the park. I grabbed the dog and met them there. Of course, we lost the rocket on the third launch, but it was fun just the same.

Hub went home to start dinner, and the kids and I hung around for a few minutes before we walked home. I tried to get a nice picture of the 3 of them and this was the result. Bud refuses to smile in photos these days. 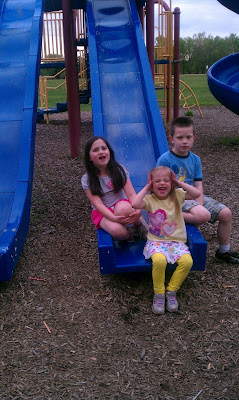 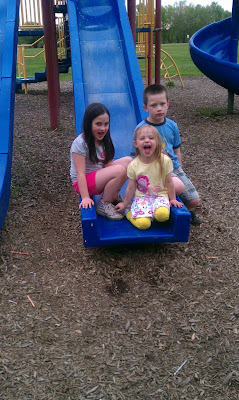 At home, Hub made me fish and roasted broccoli, and they all gave me my gift—a fountain for the garden. After the kids went to bed, Hub brought out super fancy frosted brownies that he’d picked up, and we had those with coffee. I’m in a sugar coma today, but it was really a fantastic day.

I’m pretty sure I’m the luckiest girl in the world.
Written by Saly at 10:17 AM 2 comments:

Friday Free for All

• I started writing a post earlier in the week about my near-11-year-old cat, Oswald and how he was nearly dead from renal failure, but I deleted it. I didn’t want it to get all crazy cat lady up in here. He was so bad that the vet wanted to hospitalize him to the tune of $1500, which we most definitely didn’t have in our budget. I’ve been giving him iv fluids and meds at home and he’s doing quite well. We don’t know how long it will work, because the damage is permanent and it’s sparked a lot of conversation up in here about how much is too much to do for a cat and how much is too much money to spend just to keep him alive for an undetermined amount of time.
• It occurred to me the other day that I have a little more than a month of lunch packing left for the school year, and I got giddy. Not that I won’t have to make lunch all summer long anyway, but I really hate packing with the individual wrapping and portioning and what have you. I wish these brats would just buy lunch, but they just don’t enjoy school lunch.
• We had Muffins with Mom at school this morning, so I was up, showered and ready to go before 7am which I don’t think has happened even once since I started working from home. Hub had picked up the muffins from the bakery this morning (that’s right..we serve real food and drink at our functions, not a bunch of pre-packaged crap) and left them in my car, so the kids and I dropped them off and set up. I didn’t even have a chance to sit and have a muffin with them, but I don’t think they minded all that much. From there, I took Liv to preschool where we made a Mother’s Day craft together, and later I have ice cream with Bud’s class. By the time we get to actual Mother’s Day, I’ll be wiped out!
• I am in desperate need of a haircut. The lady mullet has grown out and is far from attractive. I’m thinking short. I really liked the short front of the lady mullet, and my face has thinned out a bit so I think I can pull the short hair off again. Haircuts are exciting!
Written by Saly at 11:46 AM 8 comments:

Saly
I am a mom to 3 children known on this blog as Bud who is 8, Lucy who is 6, and Olivia who is 3. Their names aren’t really a secret though--I just don't like them to be searchable; if you want to know just ask. I’ve been married to my high school sweetheart, Hub, since 2002. This doesn’t seem like a big deal because we met on the school bus in 1994 and have been together ever since. I am lucky enough to work from home in risk management and oversight for a major corporation. I consider it a victory when I have showered by noon (SPOILER: The victories are few). If I find myself with some free time, I enjoy reading, cooking and gardening but usually, I choose sleep over any of them. I love getting your comments, and I also love email. You can email me any time at incubationnation *at* gmail *dot* com.

My Posts of Note